If you don't know, Breaking Bad was the story of a middle-aged high-school chemistry teacher who supplemented his salary by synthesizing recreational drugs. This quest for more money was instigated by a diagnosis of cancer and a desire to provide for his family after he died.

Breaking Bad premiered when I was teaching high school chemistry in northern California. I taught two, sometimes three, sections of AP plus enough non-AP chemistry sections to sum to five.

Walter White was not Weeds’ Nancy Botwin. Walt’s icy-blue product was ninety-two percent pure meth. The exact number kept changing, but it didn’t matter. Walt's product was a hit. He upstaged all the amateurs who were following recipes downloaded from the internet, and soon his competitors wanted him either dead, or better yet, doing a cook for them.

Walt wasn’t a boring geek with a pen-filled pocket protector. He was a man with a plan and he was comfortable operating well outside the legal limits. Walt's creativity (meth lab disguised as a termite tent company, as an example) coupled with his fearlessness showed that chemistry teachers could be as bad-ass and as interesting as all those lawyers and cops and doctors that are the focus of most television dramas. Of course, Walt’s life largely circled around his lawyer and the DEA, and the occasional collateral damage required a doctor.

As much as I enjoyed Walter's story, I had less luck bringing him into the classroom. Walt was not the best role model. But occasionally I'd find some useful science application. The most memorable was in the first season, an application of the corrosive power of hydrofluoric acid. Walt used HF to destroy evidence of a murder. But HF is difficult to contain. In the show, the HF ate through the body, as expected, but it also ate the bathtub containing the body, and then the floor beneath the bathtub, and then the floor below, all the way down to the foundation. An exaggeration for sure, but it sure looked cool. 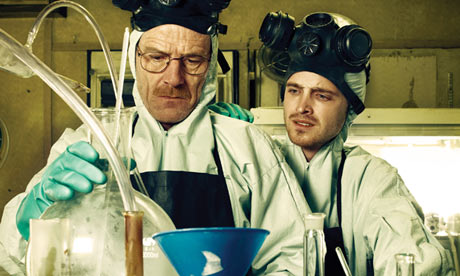