To capture a shot of a meteor you need a cloudless, moonless sky, a tripod-mounted camera, a remote shutter release, an exposure long enough to see meteor trails but not so long as to capture star trails, and a glass or two of wine.

This photo was taken during the Perseid meteor shower, which is visible in North America from mid July to mid August. The view is looking south over the Juan de Fuca Strait to the town of Port Angeles, Washington, the bright light source in the distance. Shot with a Nikon D300, 11 mm focal length, f/2.8, 33 sec, and long-exposure noise reduction (LENR). LENR works by following each exposure with a second exposure of the same length but with shutter closed. The second exposure is then subtracted from the first to remove noise. This, of course, doubles the time to take the shot.

Last Friday I grabbed camera and tripod then headed to Goldstream Provincial Park to practice long-exposure shooting. My biggest fear was tripping on a rock and dropping the camera in the water.

When people were in the shot I used an ND to take a long exposure which blurred them. But the people didn't move fast enough to disappear and instead I captured people in different states of blur.

Here are a couple of cliche waterfall shots. For these I found a polarizer more useful than a ND. The long exposure is an easy way to capture an average of the water drop positions - in other words, it blurs the water - but it also blurs the surrounding foliage because the leaves were blowing in the wind.

From today's obituary of Nadine Gordimer:

"It was not her country’s problems that set her to writing, she said. “On the contrary,” she wrote in an essay, “it was learning to write that sent me falling, falling through the surface of the South African way of life.”"

Song for the day is Constant Craving by k.d. lang. 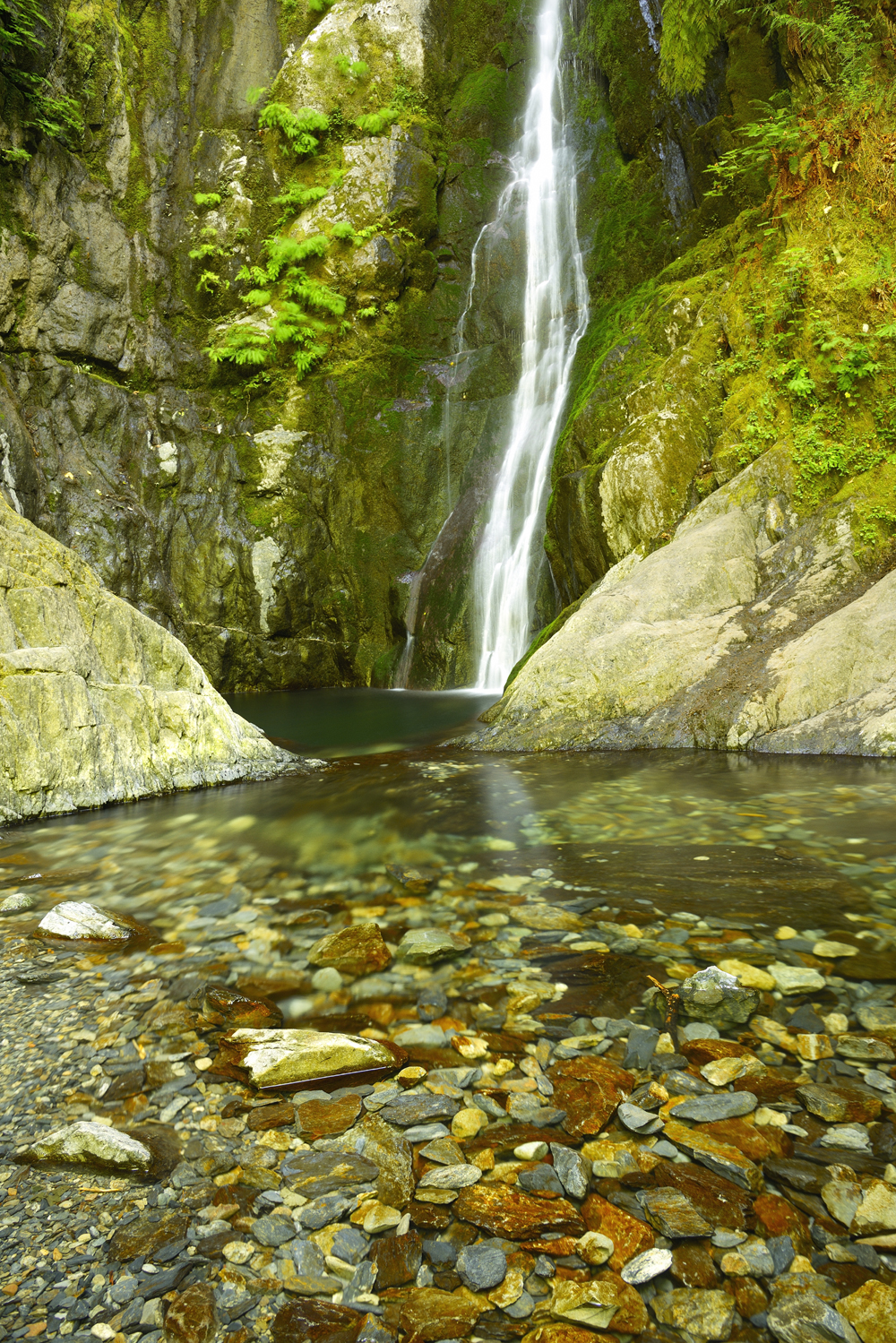 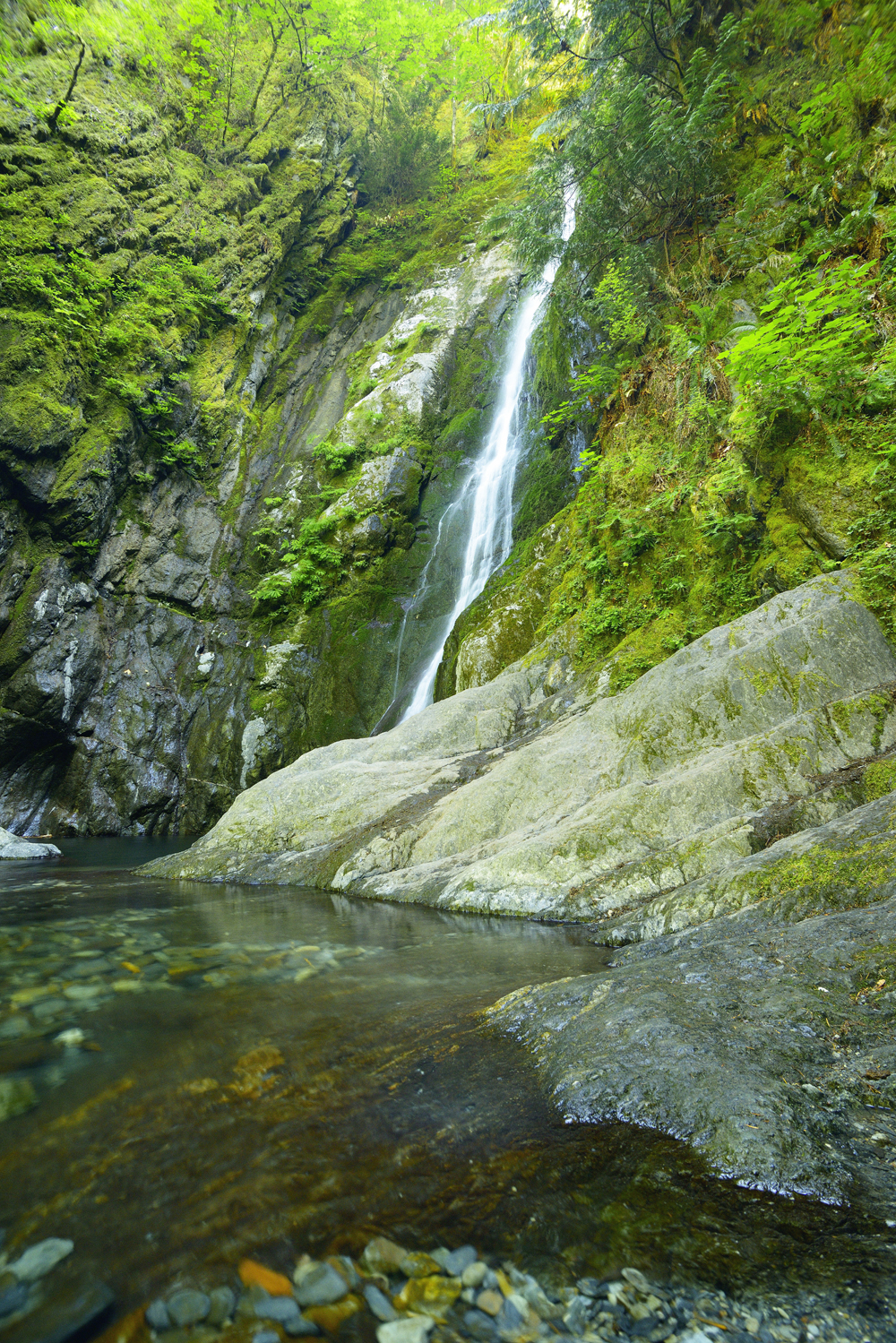 Meteor shots can be taken with a wide angle lens, a tripod, and a camera set on long exposure, typically 30 seconds or more. A lot of waiting in the dark of course but with some tunes and a glass of wine sitting out under the summer stars is not a bad way to spend some time.

I first tried this two years ago, also in August, during the Perseid shower. Lucky me, on my first night out I got a decent shot of a Perseid meteor. It's the second one below. I used bulb mode on the D300 and a timer on my android along with a wired remote to control the shutter.

So this morning, just after midnight, I spent about an hour taking sky shots to see if I can better the 2013 shot. I used the 15 mm fisheye to get more sky, a little higher ISO as I'm using a newer sensor, and a 30-sec exposure. Each 30-second exposure is followed by 30 seconds of noise reduction so each shot takes a minute, half of which time the shutter is closed and of course that's when I seemed to see the most meteors falling down though maybe I was imagining them. This morning I pulled the 53 shots into Lightroom, jacked up the lightness, and found two with meteors. Not very pretty meteors, though, with jagged trails. I guess I need to keep working on my recipe.

If tonight's clear I'm going to try again, but I'll use a non-fisheye wide angle, the same 11-16 as I used before. I don't like the curved horizon I'm getting from the 15. I'll also use the D800e's interval shooting function which I've been testing. 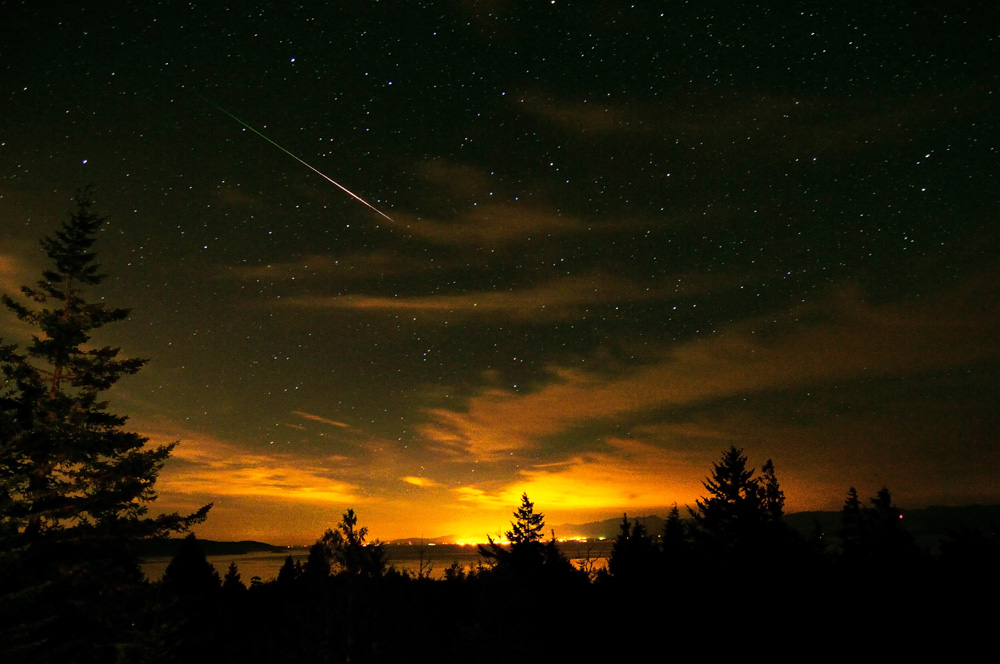 Sometimes I look at life as a series of experiments. Some experiments are solo (cooking, programming, running), some social (relationship, job, board membership), and they all generate data that I'll use in another experiment.

My current photography experiments are targeting a goal of creating a great shot of a falling meteor. While I'm not there yet I know what i want: many dots of starlight on a blacksky background, a foreground to give context, and all cut with a solid meteor streak. That's all. Well, that's a lot actually, as it depends not only on my skills but also on the weather and the moon light.

Experimentation so far has me using the 11-16 at 16, f/2.8, ISO 1250, and a target of the southern sky. The southern sky is a compromise: Port Angeles puts off a lot of light but any other direction is impeded by trees. I guess next time I'll have to forego the wine and take a drive to a nearby beach. I also wonder if i should boost the iso a bit. More experimentation.

Taking a series of long exposure shots is really tedious so I've found that if 30 seconds is long enough (more than 30 sec requires bulb mode) then Nikon's interval shooting function will take an evenings worth of shots for me, hands free. Interval shooting has three variables: interval length, shots per interval, and total number of intervals. So on the morning of the 14th I decided to take a series of 30-second shots from midnight till about 2 in the am ans so I set up the camera for one shot (aperture, iso, exposure) then set the interval function to take a shot every 65 seconds, with 1 shot per interval, and for a total of 120 intervals. I chose 65 sec intervals because the shutter is open for 30 then closed for 30 (long-exposure noise reduction), which totals 60 sec. I then added 5 sec as a cushion. Once set, all I had to do is press GO then head in for another glass of wine.

This was taken early on the morning of the 14th. I don't like the meteor streak as it's not solid but it sure was easy with the interval shooting function. 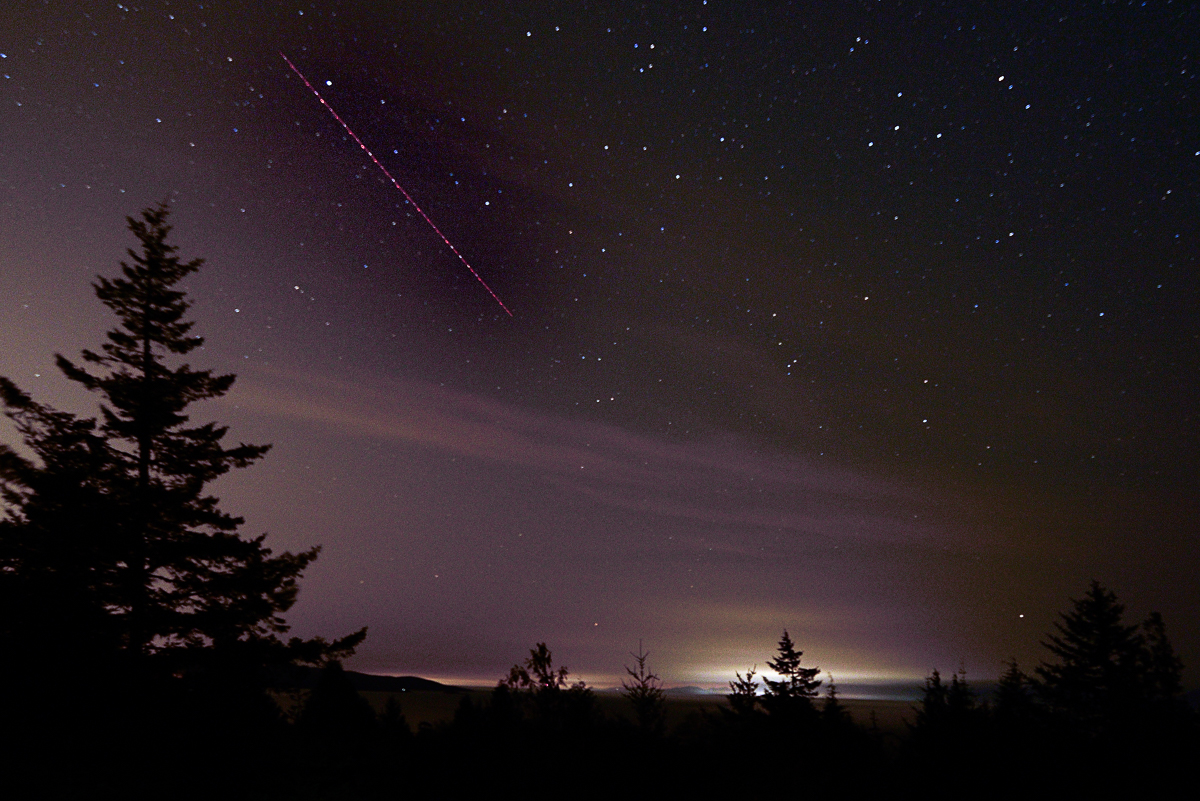