I tend to organize things, photos, folders, correspondence, notes, by date, so labels start with yyyy-mm-dd which the computer quickly sorts into chronological order. This date format is called big-endian notation because the first in the series is the biggest item (the year), followed by the next biggest, and on to the smallest (the day). Of course, the existence of big-endian implies the existence of small-endian.  Yet what might be called middle-endian - like December 17, 2013 - looks most pleasing to my eye, likely because I was raised in the states. According to the Guardian's Americans are almost alone in their use of mm-dd-yyyy.

When astronomers talk about the gigantic region of emptiness they aren't talking about the place where Republicans store their empathy but a big hole in space where some 10,000 galaxies should appear but don't.  Areas such as this are also called a supervoid, a cold spot, or an "under-dense" area. Just reinforces the thought that we are all pretty insignificant, eh?

Google search is now rewarding responsive sites when a user's search comes from a mobile device. That's good to hear, I think, both for the user and the developer, though not everyone agrees. I'm surprised at how many people hate mobile sites. I like being rewarded for the extra design complexity that building a responsive site entails.  Here are some of the things I do to improve search performance:

My most recent site, Farmer Notary, passes the mobile-friendliness test with the message "Awesome! This page is mobile-friendly" though I can't figure out why it is complaining about four blocked resources due to robots.txt as the site's robots.txt is empty.

I've starting using SASS and now I ask myself what took me so long. I love having variables in my css so a couple of projects ago I implemented a subset of SASS's functionality using PHP but it sure didn't work as well, or have all the features of, SASS. I'm also using the Prepros compiler which works seamlessly in my workflow, monitoring and auto-compiling scss files as they change.

The music I'm listening to is Philip Glass' Glassworks.

I'm still reading Persuasion after being stuck for awhile at page 140 - page 280 of the annotated version - where Anne, newly settled in Bath, becomes re-acquainted with William Eliot whom she consciously, or sub-consciously, compares to ex-boyfriend Captain Wentworth. I'm making Austen sound a bit soap-opera-y but really it's a lot more than that.

I am also listening to King Lear, the annotated audible.com version, though it is labelled "appreciated" as opposed to annotated. (I don't like that audible is yet another amazon but what are you going to do?) Last week I finished listening to Hamlet and so enjoyed the commentary that I had to tackle another Shakespeare play. The plot of Lear is well embedded in our culture, to be retold and reworked by other writers, such as in Jane Smiley in A Thousand Acres, and I'm glad to find these annotated versions which make Shakespeare so approachable.

This is what I call good news: a recent study suggests that young Americans are less superstitious than their elders. Hooray!

You might say I was lucky. As a very young boy in hyper-religious Texas I looked around the church I was sitting in and realized with a chill that those surrounding me actually thought someone was listening to their prayers. I told my mom that I'd never set foot in her church again. Fortunately for me, she was primed for my decision as my father had made the same decision when he was a boy. Of course, I've since visited as tourist many beautiful old churches which I look at as testament to religion's once-powerful ability to explain what was at the time unexplained. I keep hoping we'll move on from this illusion, and today's Times articles - there are two - give me some hope.

In a similar vein check out Andy Borowitz on "fact-resistant humans". Actually I'd recommend Andy Borowitz' take on anything.

Today's photo was inspired by bokeh, which is a popular photographic buzz-word for the out-of-focus areas of a picture. If you check out any of the photo blogs you'll quickly hear arguments over which lens has better bokeh. Bokeh quality is subjective, like art. Your taste in bokeh may evolve as you see more and more of it.

This out-of-focus area of a photo can be maximized with the use of a large aperture (small f-stop) but there are other ways such as the use of long focal lengths. Prime lenses, or lenses of fixed focal length, are popular for maximizing bokeh because the largest apertures are the purview of primes. Aperture shape and lens aberrations, among other things, also affect bokeh.

This shot was taken with an 85 mm prime set at f/2.2. It's a yellow bench viewed through yet another lens, a 50mm f/1.2. The big yellow blob on the right is of course the yellow bench completely out of focus.

Victoria's week-long buskers festival features musicians, acrobats, and jugglers. I found the crowd more interesting than the entertainers, such as this woman taking a picture of herself. 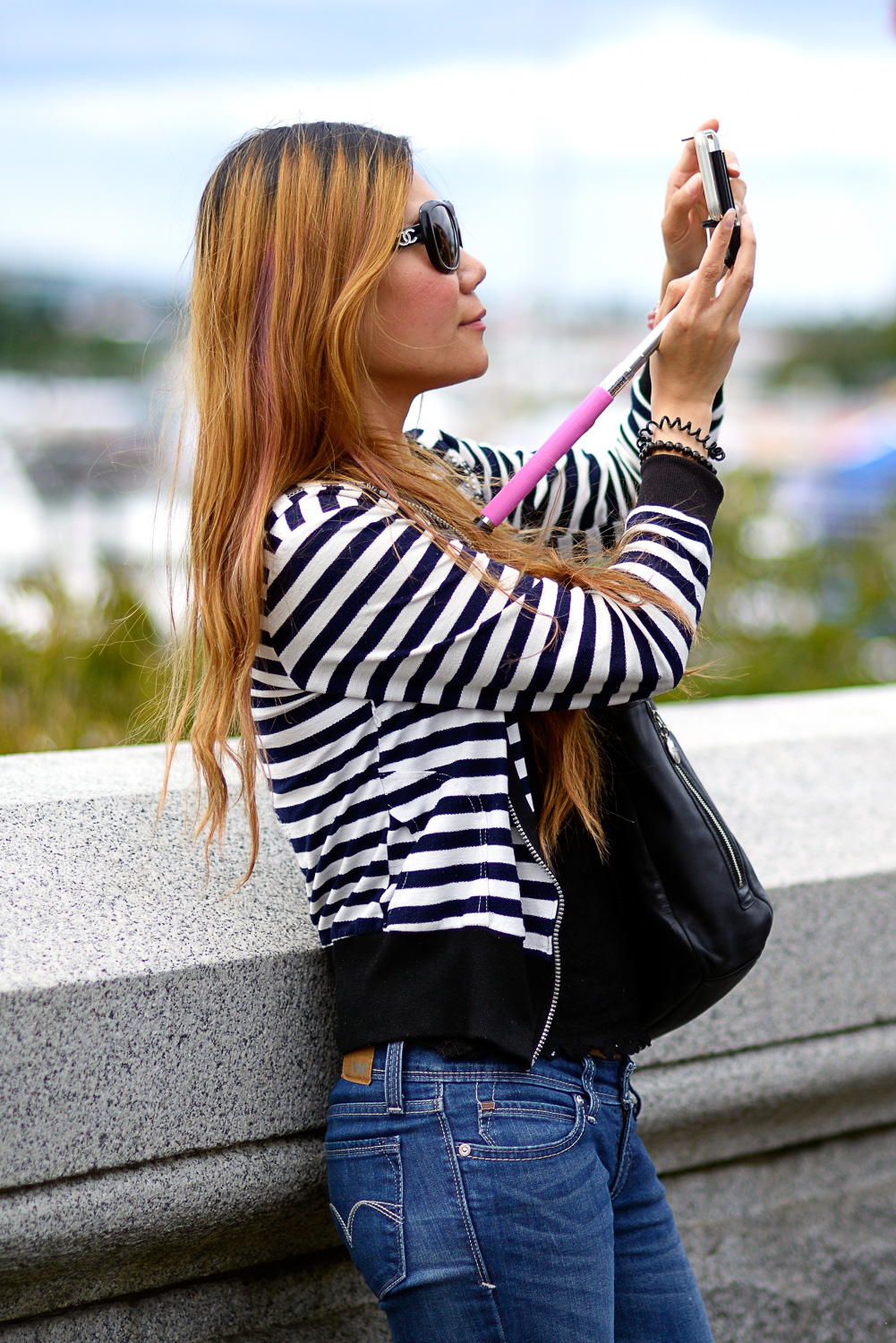