I've grown accustomed to reading on computers and phones (though I miss home delivery of the Times) so I decided to get an e-reader. I figure I'll have fewer physical books to store (and, someday, get rid of) and more reading options when travelling.

I bought Kobo's new Aura H2O, $180 plus $40 for the cover. The Kobo reads epubs and pdfs, even jpgs and docs, but nothing from Amazon. And that of course is the big disadvantage to the Kobo. Buying epub-format books on Kobo.com and Chapters is nothing like Amazon. The Amazon site is, well, it's Amazon; designed to make the shopping experience easy and supportive with comments and a well-designed search. The flip side is that there are a lot of free (Project Gutenberg) and almost-free epub and pdf books. It helps if you've a taste for works that are over a century old. I quickly loaded it with pdfs and epubs. No more asking myself, do I take one Dostoevsky or two Austens?

The Kobo's display is crisp and easy to read in the daylight and the dark, which is what you'd expect. Occasionally the screen flashes black, something to do with the e-ink technology, which is jarring until you get used to it. The flash is more common on menus, less frequent while reading.

The Kobo is waterproof so you can swim with it or read in the bath. I don't see me doing either but waterproof isn't a bad feature, like when it's in your backpack and it rains. Waterproof didn't make it much bigger or heavier as they just added seals, like Nikon does with their higher-end bodies.

The Kobo firmware could use some work as I can easily crash it. Trying to open one of Davd DuChemin's admittedly-large pdf books on photography immediately brings the Kobo to a white screen of death that only a power reset can fix. I suspect it has to do with the pdf's images as a similarly-sized Nikon D800 manual opens with no problem.

I'm listening to trance, In Pools by Human Mesh Dance. 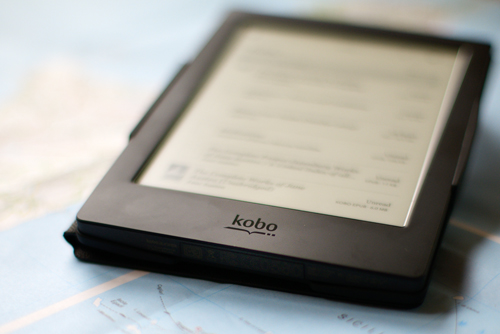 Today I checked out Fodor's Southern Italy from the Vancouver Island Regional Library. Not because I particularly like Fodors, Rough Guide and Lonely Planet are more my taste, though it isn't for any concrete reason, maybe I just like what the names conjure up in my head. Anyway, I wanted to test the Kobo as library-book reader and Fodor's was the first hit for my search.

To get a library epub onto a Kobo do the following. Note that Adobe software must be installed and both the Kobo and computer authorized *before* you add any books.

For subsequent books just do steps 1 then 6-9. The process certainly isn't insurmountable, but it would be nice if it were easier. Kobo should have the Adobe software built in.

The accompanying image is notable only in that I took it on my iPhone a minute ago and ftp'ed it to this site using Panic's Transmit iOS. Panic's software makes this very easy. I just wish my Nikon had this capability.

I'm listening to Second Heartbeat by Shy Girls. A bit too Michael Jackson though.

It's cold outside, there's even some snow, so I'm heating up the house by cooking. Yesterday I made scones. I was inspired because I had a new cookbook, The Pie and Pastry Bible by Beranbaum, an author recently name-dropped in the Times. As an e-book it was only $4 (and that's Canadian).

One problem, though, is that as an e-book - I'd not had reason to try this before, mind - you can't print from an e-book. At least you can't easily print. But I figured there had to be a way as I wanted a printout to add to my binder of recipes, many of which are commented. (Typical: cut time by # min as stupid oven not below 375.)

Long story short, I made the scones and they turned out fine. As proof I've a couple photos below.

And of course I got around the printing problem. I did it two ways: the easy but less satisfactory way is to print screen grabs on the pc. It works but the pages aren't editable. The better way turned out to be to pull up each page on the iPhone, save a screen shot, OCR the jpg, then paste the text into an editor. After removing extra line breaks and fixing tabular data I had an editable and printable recipe. And like most things, the next time I do it, it will go faster.