One of my post-travel tasks is to write reviews, usually to Trip Advisor. Then I put it off by telling myself the world's store of information doesn't need the additional bits it would take to store my reviews.  Today I wrote two. Both are establishments in Palermo, Il Culinario with its imposing proprietor who appears twice in my blog, and Casa Galati, a near-perfect economy b&b.

And speaking of Italy (you are probably sick of it by now), in yesterday's nyt Taiye Selasi caught my eye by writing about Italy. She says the northern mountains in Italy are more like Germany, and the far south is, well, not like Germany. Since northern and southern Italians have little in common they might be better going it alone. I just wonder if this is true? I appreciate the desire to cement prejudice into law, I just don't want to live in a place where that becomes a reality.

I'm slowly processing photos which means i convert them to jpgs then make a small version for the web. I post all that i process. Today's photos are of Taormina, Mt Etna as seen from Castelmola, and Castelmola itself. Taormina and Castelmola are ridiculously charming. 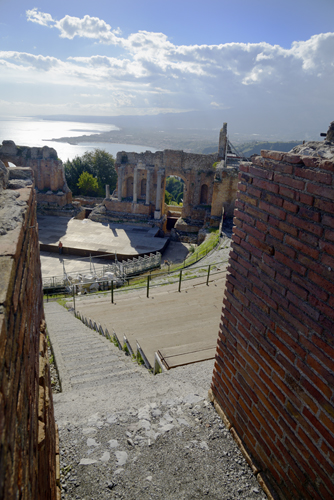