Much of today is spent on the bus to Palermo (13.5€), time spent binge listening Serial podcasts and watching the agricultural scenery go by.

Serial makes me think about the challenge of creating a just judicial system. For example, in one episode the judge instructs the jury to disregard the defendant’s  refusal to testify. But in the podcast this is followed by a statement from a juror who clearly did not do as instructed. The juror states that Adnan’s failure to  testify made her think he was guilty. I don’t blame the juror.  When i watch tv court dramas (I really enjoy the Good Wife) the same thought hits me when a judge tells a jury to "disregard that last statement". Just how does one un-hear something? This is a pretty serious weakness in the jury system.

Anyway, I digress. Back to Italy.

We are in Palermo. Our b&b is only steps from Via Maqueda and the Piazza Verdi, home of the Massimo Theatre, Italy’s biggest opera house (see photo).

Shortly after arrival we head out for dinner and find Via Maqueda vehicle free and filled with people young and old promenading through the old town. The city has a lively and festive atmosphere. We look forward to our last days in Sicily exploring Palermo after which we will catch an overnight ferry to Naples to begin the journey home to Canada. 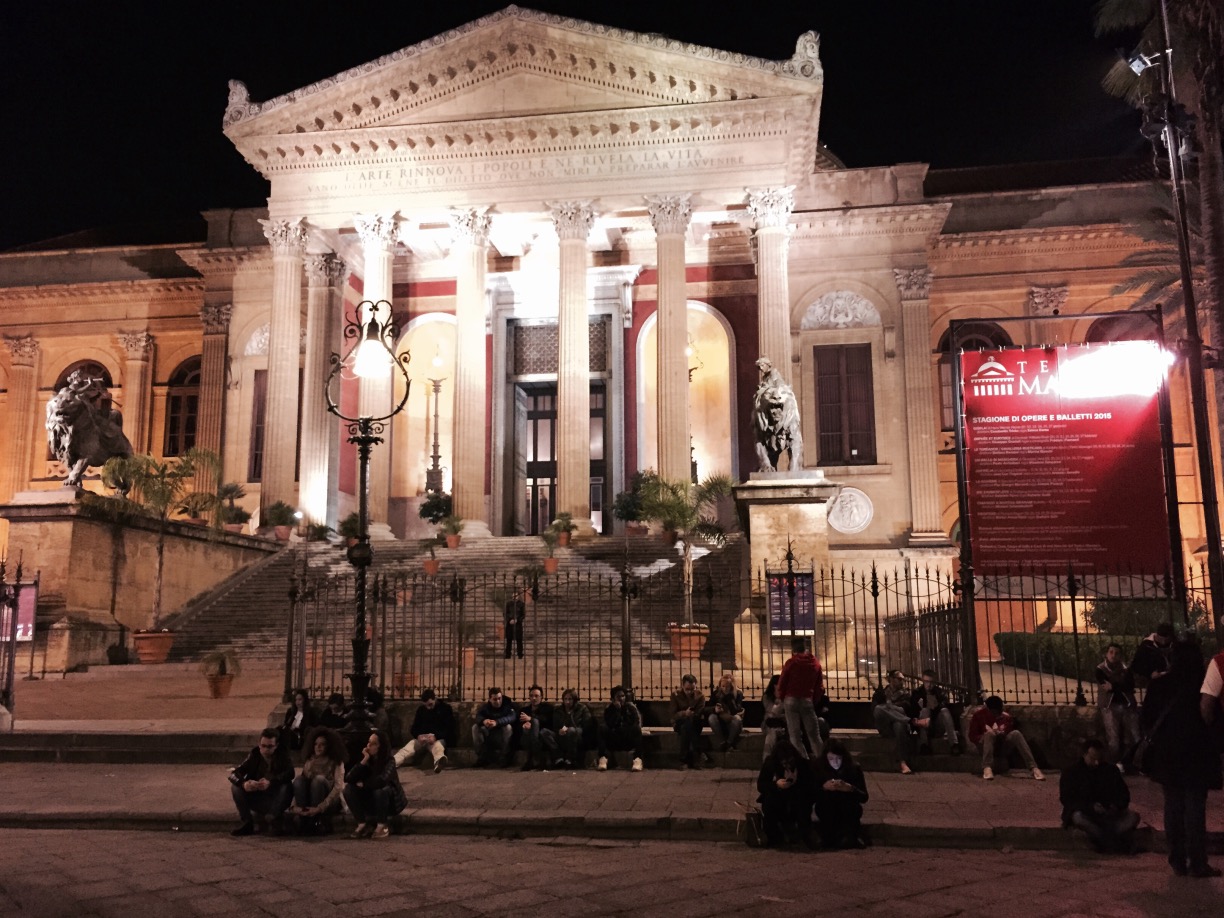 We spend the day exploring medieval Palermo which is just outside the door of our b&b.

We start at Quattro Canti (four corners) which divides the old town into four quadrants. At one time inhabitants of the quarters had their own dialects, trades, palaces, and markets, and intermarriage was discouraged.

Quattro Canti isn't a piazza, which is what i expected, it is the intersection of two major streets, Via Maqueda and Corso Emanuele.

At each corner of the Quattro Canti is a tall concave wall with several tiers of statues. In years past this was where the heads of convicted rebels were displayed.

Immediately adjacent are Piazza Pretoria and a church. This being Italy, there are actually four churches facing the Piazza but only one caught my interest, San Giuseppe dei Teatini.

San Giuseppe's misleadingly simple exterior conceals a breathtaking interior.  Ceiling to floor, front to back to side, it is covered in different shades of marble and tile and paint, all worked into beautifully detailed representations of religious themes. It's almost enough to inspire me to join the Catholic church, which I think may have been the point. I imagine this space had a magical impact on the minds of the residents of seventeenth-century Sicily, residents who likely lived in a style that differed vastly from that represented by this gorgeous spectacle.

Next to the church is Piazza Pretoria, and at its center is a fountain surrounded by many many statues of naked nymphs, in other words, naked men and women. The flagrant nudity on display so offended neighboring churchgoers that they called it the Fountain of Shame. Given that the fountain predates the church i wonder why the church was built next door but I've no answer to that question.

We spend the rest of the day walking the old town's narrow streets, shopping, stepping into the churches that are open, and eating: ice cream, pastry, pizza, espresso, and arancini.

Today's photos are of  San Giuseppe, the roof of the Cattedrale, the Fountain of Shame, and Quattro Canti.

Our plan this morning is to take the bus to Monreale, a town about 15km from Palermo. The Monreale Cathedral is acclaimed as a stunning fusion of Arabic, Byzantine, and Norman craftsmanship.

We wait over an hour at Piazza Indipendenza for bus 389 which is said to run every half hour. The bus finally arrives and a crush of people approach the door. We push our way in but the bus passengers already inside refuse to move to the back where there is free space. I am jammed in, I feel someone grab my shoulder bag, I cannot move, and I think this is no fun.

My claustrophobia kicks in so I call out to Paul, who is a little further in, "I'm outa here!" I push my way out of the bus to the street. Paul follows. What a relief! Seeing yet another church wasn't worth the aggravation.

The bus stop just happens to be in front of the entrance to the Palazzo dei Normanni which was the residence of the king during the Norman occupation. Today it houses the Regional Parliament of Sicily, which some claim is the world's first modern parliament.

The Palazzo was built in the ninth century though like many of the local buildings it has been enlarged and modified repeatedly as different groups came and conquered. Because of this pattern of being overrun by different groups over thousands of years, Palermo's architecture exhibits a diversity of styles which to my eye blend well.

The highlight of the Palazzo is said to be the Cappella Palatina, the private chapel of Roger II, and it is open to the public today (7€) so we decide to visit.

We sit in front of the entrance to read about the Cappella Palatina. As we sit, a large group of young people who are gathered in a nearby park start marching towards us and i watch as the guard starts to pull the gate to the Palazzo  closed.

The guard lets us in then shuts the gate just before the marchers converge on us. I hear the same chant that i heard in Salta last February, "the people, united, cannot be defeated" though in Italian, not Spanish, and of course they could be saying something completely different. If you've done a few demonstrations, anti-war, act-up, etc., you know it.  Maybe the protest is related to the socialist posters that are plastered on walls in town.

The Palazzo is beautiful and the chapel is stunning, completely covered in mosaics depicting stories from, you guessed it, the bible. Also nice is that the chapel is empty except for one other couple.

November has proven to be an excellent month for visiting Italy: no crowds plus comfortable weather. Paul and I are once again the only people in our B&b. Taormina, Ragusa,  Siracusa, and now Palermo, in the first two we were the only guests, in the last two we were the only guests at check out. Only Sorrento was full. Actually i think a few more guests would be nice as trading travel ideas with others can be useful.

From the Palazzo we walk over to check out the Ballaro market which is spread over maybe ten blocks of Dickensian streets. Dark and dirty looking like much of old Palermo, the Ballaro market consists of block after block of market stalls selling fresh vegetables, cheese, smartphone covers, clothing, every size of fish, long silver eels, underwear, octopus, entrails, cow heads, it just goes on and on. The worn cobblestones are slippery wet in places from the market  guys washing away fish bits, and the passages are barely two people wide. Annoyingly, there are the ubiquitous motor scooters squeezing through. Reminds me of Istanbul's Grand Bazaar though the Bazaar lacked scooters.

For dinner we go to il culinario, a neighborhood restaurant, for a wonderful meal. Silvio, the owner, explains each course with Sicilian pride and passion and brings extras such as an additional appetizer and an after dinner sweet wine. The large group dining at the next table exhibits the unreserved passion and physical expression i've come to enjoy observing while in Italy. So different from my family.

Tomorrow night we are on an overnight ferry to Naples and may not have wifi so the next update may be from Frankfurt.

Photos are of Chiese Capitolare di San Cataldo (a 12th century Arab-Norman church), the main shopping street via Maqueda, a poster take off of Breaking Bad, and a ceremony we encountered and evesdropped on after dinner. 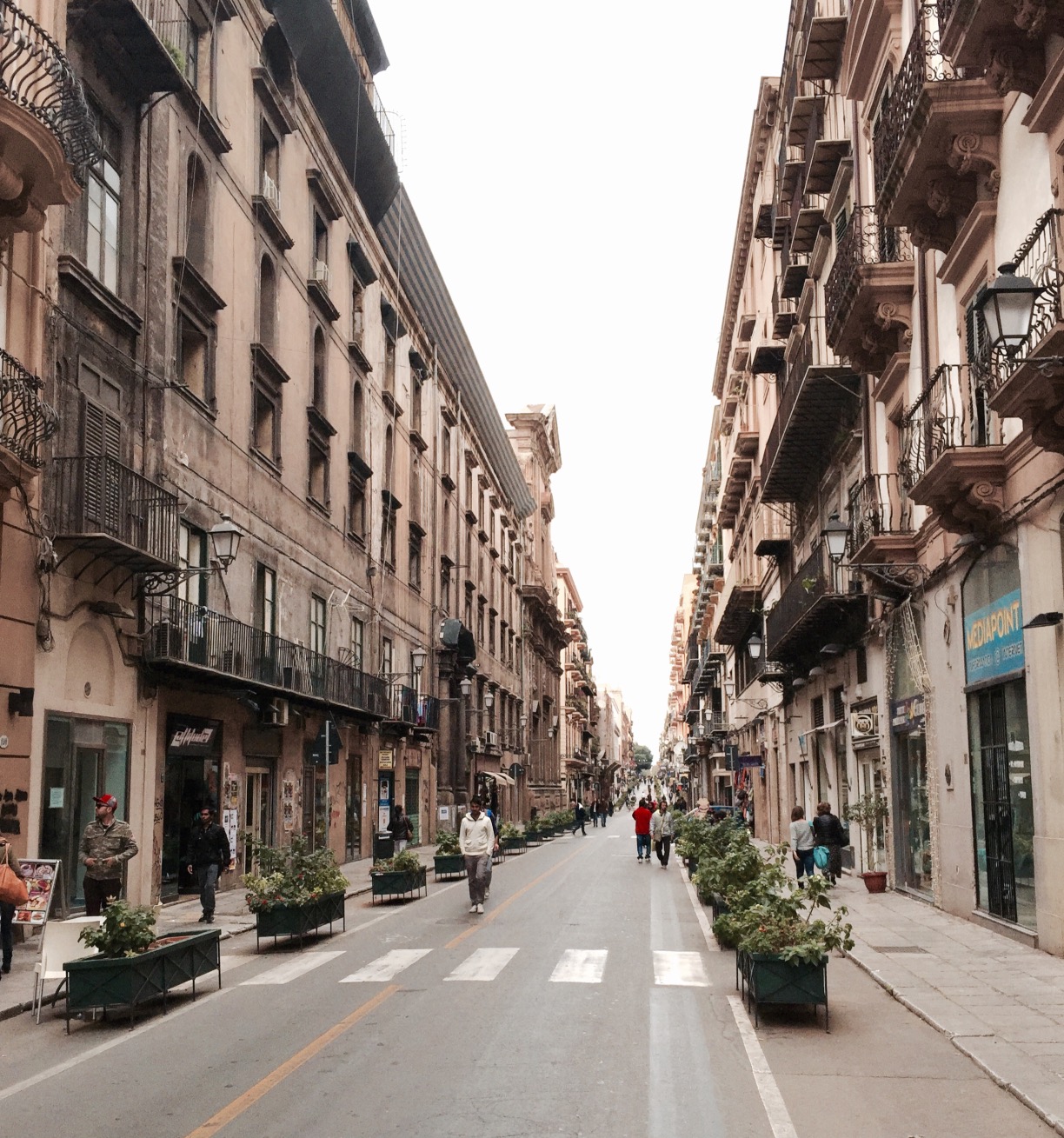 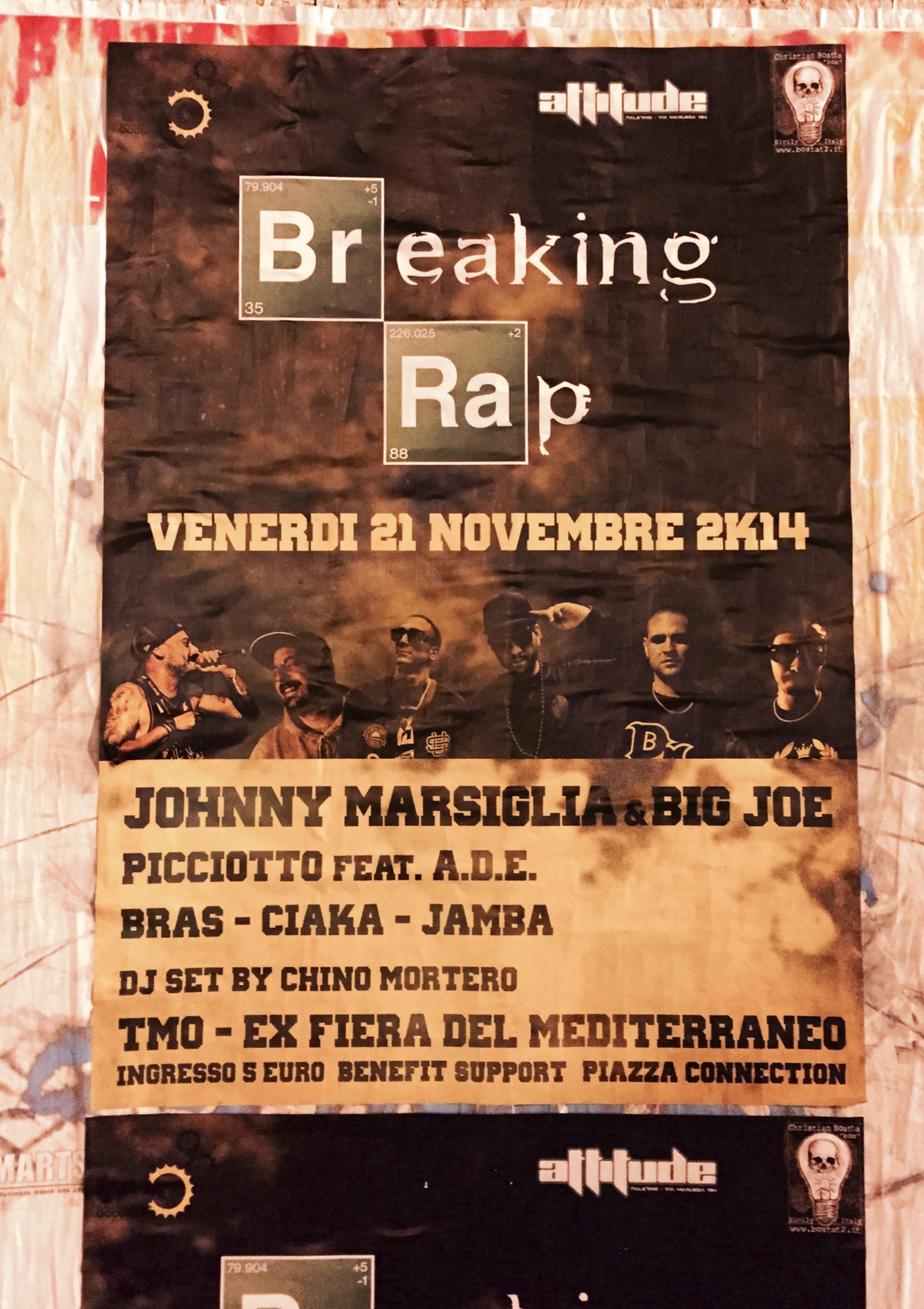 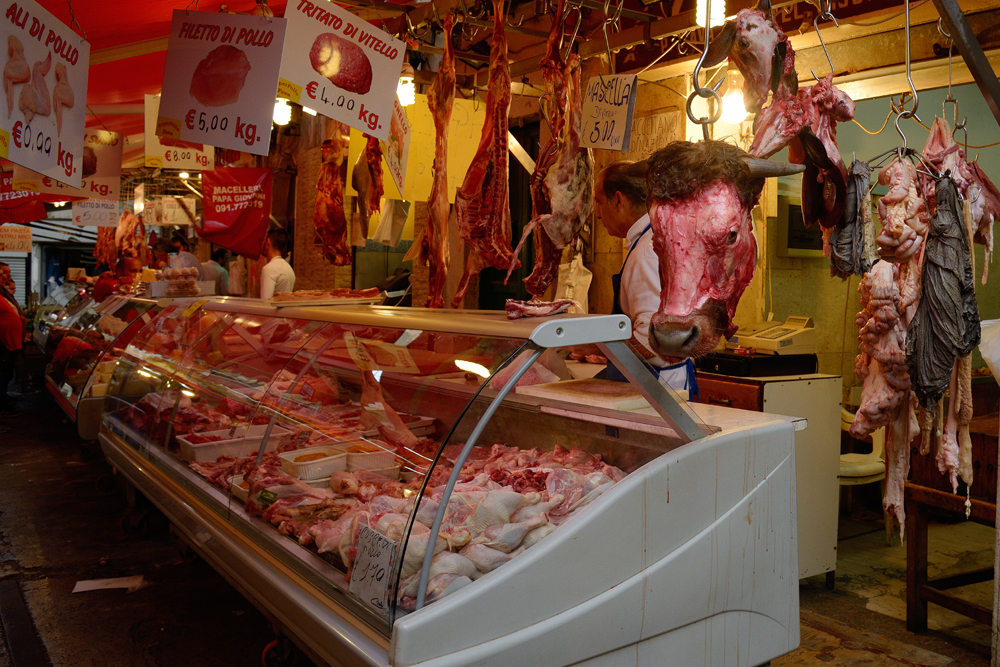 I wasn't expecting much for our last day in Sicily. Check out of the b&b then hang out with luggage until time to board the 20:00 ferry for Naples.

But no, the Palermitani (residents of Palermo) are looking out for us. Marco at the b&b offers us to keep our room for the day at no charge. A real friendly guy and a nice place to stay.

We find a ceramic shop with colourful Picasso-inspired designs. The question is, do we want to carry one more breakable on the plane home? Of course!

We walk to the Kalsa neighborhood, which is seaside, and along the way we pass a school overflowing with students. Late teens, maybe a bit older. Palermo is full of young people, i think they've some universities here, which adds good energy to the city. Anyway, the kids call out to me, they see my camera, they want me to take their pictures. They pose and i shoot and we all have fun. Nice kids.

We wander into Santa Maria dello Spasimo, or Lo Spasimo, a church in the Kalsa neighborhood.  The church was never completed because of the rising Turkish threat in 1535, where resources meant for the church were diverted to fortifications of the city against any possible incursions.

Once inside a woman walks over to tell us the history of the building and about how it's now used for jazz concerts. Then another lady flags us down to show us a cupola that she thinks we'll find interesting.

By now we are hungry, but it us 14:00 and not much is open. We just happen to walk past il Culinario, where we ate last night. It is closed, they only serve dinner. Suddenly Silvio, the owner, walks out and calls to us. He seats us, brings some of his delicious chickpea and crostini appetizers, then gets us two pizzas. He hangs around and talks about his travels in his broken English. When we're done he serves us a small dessert and a small glass of his homemade lemon liquor.

Palermo has made a very positive impression on me. It's Italy turned up a notch, proud and passionate survivors of thousands of years of battles, from the Romans, Burbons, Arabs, the inquisition, etc., up to the more recent fascists and the mafia. A fine place to visit indeed.

The photos are of Lo Spasimo and a group of students posing for me outside their school.

At the moment the most important article of clothing on Vancouver Island is a good raincoat. It's not cold, just wet.

I've added a number of shots to the Herculaneum and Palermo photo galleries. A few are copied here: the first six are the ruins - I don't know why I'm surprised at the colors - and the rest are Palermo. The last is of a group of students who insisted on posing.

Palermo and Naples are similar.Block after block of narrow streets squeezing between old stone buildings. So much detail! And you often feel you've seen this before, because it fits some idealized or maybe television or movie sourced brain picture of how Italian cities are supposed to look. Despite their similarities Palermo seems more prosperous, youthful, and energetic. 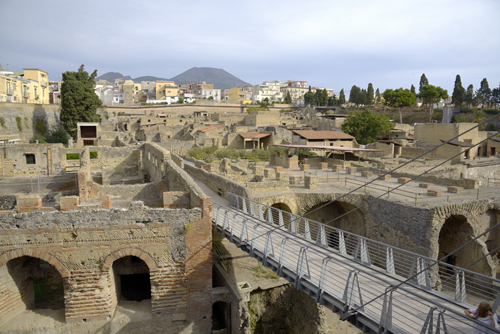 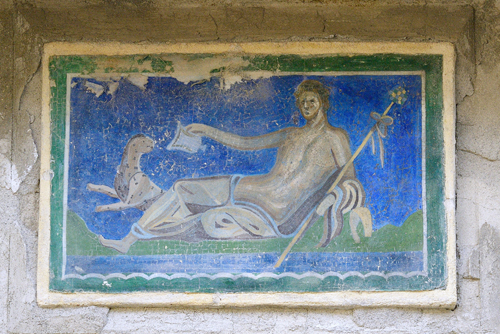