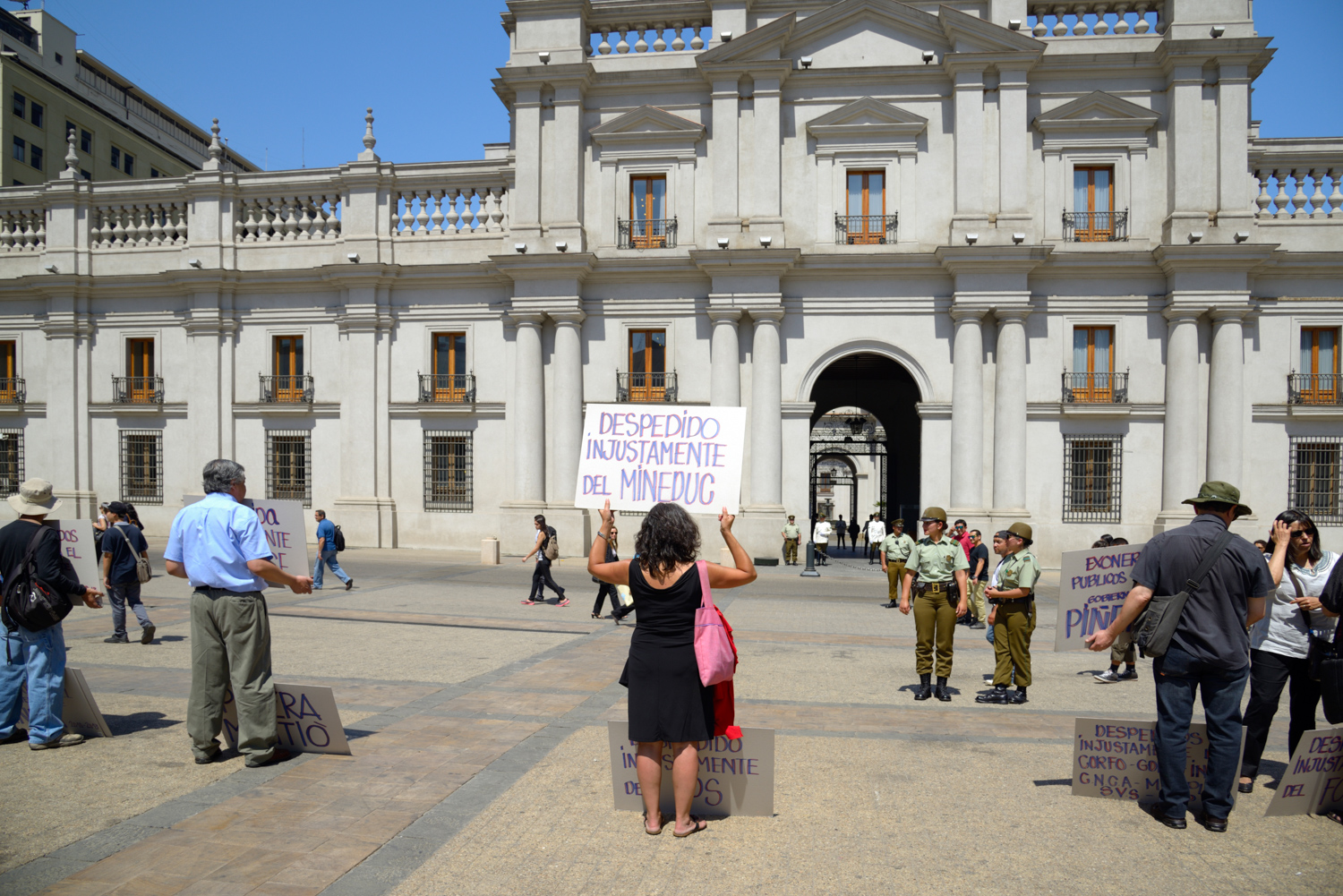 Our first day in Santiago started early, 2 am, when we woke from a bang plus the building shaking violently. A 5.3 earthquake had struck nearby, in Valparaiso. This is the strongest earthquake I've ever felt, and I lived many years in California. But I saw no damage and city life went on unperturbed.

Today was warm and dry and we walked around the central city, starting from the apartment in Barrio Santa Lucia. The apartment is well located on a narrow street a block from the hilly park Cerro Santa Lucia and a couple of blocks from the Universidad Catolica. The university students give the neighborhood a lot of vibrancy.

We walked along the river, Rio Mapocho, that cuts Santiago in half, to the fish market and food court, Mercado Central, where maitre d's stand in your way to entice you into their establishment then insult you when you refuse their entreaties; like Istanbul, but with fish instead of carpets.

From the Mercado we walked along one of the many pedestrian-only streets, filled with workers and shoppers and the ever-present police or Carabinieris. I'm getting accustomed to the heavy police presence in South America. I've read the Chilean police are scrupulously honest, and I see them interacting with civilians, giving directions, for example, but I've also read that they are powerful and you shouldn't be caught photographing military related stuff as they will take your camera. I really don't want to lose my camera so I'm cautious.

We stop to sit in the Plaza de la Constitucion. One side of the Plaza is bordered by the Palacio de La Moneda or presidential palace. The president no longer lives here but it contains the president's offices. The building was rebuilt since being attacked by the military during the 1973 coup d'etat that overthrew president Salvador Allende (with help from the CIA).

Interestingly, this Catholic country recently elected Michelle Bachelet as their new president, and by a wide margin. She is a former president, a physician, a socialist, separated from her husband, and an agnostic.

As I look at the Palacio I see standing across from the guarded building a line of protestors holding signs about some people being wrongfully terminated (at least I think that is what their protest is about.) I also see tourists taking pictures of protestors and police and I figure my concern is probably misguided and my camera is safe.

Next we pick up some pastries, which requires me to practice my mangled Spanish as you must first tell a cashier what you want, pay, then take the receipt to another person for pickup. Like Europe. Once again I'm rewarded for my effort to speak the local language by my pronunciation being corrected.

Finally we walk to the top of the park, a lush yet rocky hill with fountains and a church and many different vantage points overlooking the city. From here we can just barely make out the near-by Andes, which would provide a beautiful mountain backdrop for the city—the mountains are close, like Vancouver—if only the air were as clear as Vancouver's.

I expected Santiago to be more like Buenos Aires, but the cities feel very different. Santiago goes to bed earlier and seems more conservative in terms of opening hours and alcohol.

Santiago is also better maintained: sidewalks are clean and unbroken, parks are watered and groomed, everything looks as if it could be in a prosperous North American city. Drivers are better behaved. Even the cars are different: Buenos Aires is full of small European cars, Fiats, Peugeots, VWs, etc. , plus old cars that make me think I'm in Cuba, whereas Santiago has larger American and Asian cars.

That is all for today, we are off for sushi.